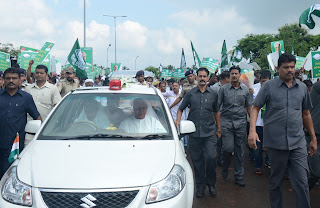 Bhubaneswar,
Sep 16: All eyes will be on Odisha Chief Minister Naveen Patnaik’s argument at
the proposed tripartite meeting between him, his Chhattisgarh counterpart Raman
Singh and Union Water Resources Minister Uma Bharti on Mahanadi river water
dispute on Saturday in New Delhi.
Though the
Chief Minister claimed that the State Government was fully prepared for the
Saturday meeting, but his Government has never put the information and factual
position of the State on Mahanadi in public domain despite persistent demands of
opposition parties.
However, while
talking to media persons before leaving for New Delhi on Saturday Patnaik vowed
to fight for the rights of the people at the tripartite meeting scheduled to be
held in New Delhi tomorrow.
“I assure
each one of you I will put my best efforts forward and leave no stone unturned
in the fight for the people of our State,” said Patnaik.
“I am going
with a lot of hope that the Centre will listen to the voice of Odisha and do
justice to the people of our State on the sensitive Mahanadi issue,” added
Patnaik.
The Chief
Minister also met the members from the public and political parties for last three
days who came forward with valuable suggestions in the larger interest of the State.
On July 29,
the Centre as part its efforts to resolve the dispute between the two States
mutually, had convened a joint meeting in New Delhi, which was attended by
Chief Secretaries of both Odisha and Chhattisgarh.
However,
there was no headway of the meeting forcing Uma Bharti to convene another
meeting between the two Chief Ministers of Odisha and Chhattisgarh on September
17 for a mutual solution to the dispute.
Odisha has
been opposing unilateral construction of a slew of barrages by the Chhattisgarh
Government upstream Mahanadi.