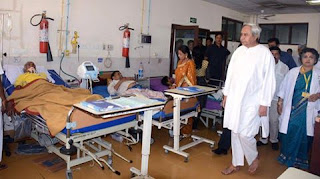 Bhubaneswar, Oct 18: Chief Minister Naveen
Patnaik on Tuesday visited patients at AMRI and AIIMS Hospitals who were
admitted there after being evacuated from SUM Hospital after a major fire broke
out there on Monday evening and enquired about their wellbeing.
So far 20 patients have been died due
to the fire.
“Deeply grieved by the loss of lives
and injuries in the fire mishap in a private hospital at Bhubaneswar yesterday.
I wish strength and speedy recovery to those affected and my thoughts and
prayers are with the family and friends of the those who succumbed in the
tragic incident,” said Patnaik.
We deployed the state machinery
immediately to mount an immediate rescue, and all patients were evacuated and
shifted to other hospitals, said Patnaik.
“I have visited Capital hospital,
AIIMS and other hospitals to oversee ongoing treatment of several of the
evacuated patients. Also, spoke with PM Narendra Modi about this tragic
incident and informed him of our efforts for treatment of injured, and that
senior Ministers and officials from the State are monitoring and guiding
operations first hand,” Patnaik informed.
Meanwhile, the Chief Minister directed
a probe by Revenue Divisional Commissioner (Central Division) into the fire
mishap and the reasons behind it.
He also announced that the State Government
will bear the treatment costs of the injured from Chief Minister Relief Fund.