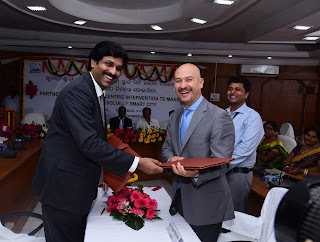 Bhubaneswar,
Nov 18: Exactly a month after Member States of the United Nations met at Quito,
Ecuador, to adopt the ‘New Urban Agenda’, the Bhubaneswar Smart City Limited
has signed an MoU with the United Nations Population Fund (UNFPA) to take the
agenda forward in Odisha.
The
Quito declaration stresses upon readdressing the way cities and human
settlements are planned, designed, financed, developed, governed and managed in
order to reduce inequalities, promote sustained, inclusive and sustainable
economic growth and achieve gender equality and empowerment of women and girls.
The
Bhubaneswar Municipal Corporation-UNFPA collaboration envisions a Smart City
where there would be special focus on the needs of young people, girls and
women. To promote safety and security of girls and women, especially in the
urban slums, safety audits and community engagement programmes are on the
anvil.
A
range of innovative interventions would help look beyond a brick-and-mortar
blueprint to factor in people-centric interventions. To name a few: The Citizen
Connect programme, Support My City volunteer programme, and Neighborhood Watch
programme.
In
order to tap the demographic dividend, a youth-centric and youth-led integrated
social intervention would be implemented in educational institutions of
Bhubaneswar with several earmarked for the slums of the Bhubaneswar Town Center
District Area.
The
MoU also looks at addressing issues and needs of women and adolescent girls
including safety, gender-based violence and barriers to access health services.
At
a special function held for signing the MoU, Tourism and Culture Minister Ashok
Chandra Panda said that having won the coveted Smart City challenge,
Bhubaneswar now needs to live up the expectations of the people.
When
Bhubaneswar was formed in 1948, it covered a mere 26 sqkm and had a population
of 40,000. Today, the city spans over 135 sqkm and has more than a million
people. More than two-thirds of this population increase has been because of
migration from the hinterlands. This has also given rise to slums. As per the
estimates of the Bhubaneswar Municipal Corporation, 35 per cent of the city’s
population lives in more than 300 slums.