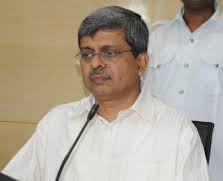 Bhubaneswar, Nov 19: Chief
Secretary Aditya Prasad Padhai on Saturday directed Fisheries and Forests
Departments and also the Marine police not to harass the traditional fishermen
unnecessarily during the fishing ban period for the turtle nesting season.
“Catch hold of the real
criminals who cause damage to the life of turtles,” directed Padhi while
chairing a meeting of the High Power Committee for Protection and Conservation
of Olive Ridley Sea turtles here State Secretariat here on Saturday.
Padhi directed the Departments
of Fisheries and Forest and the Marine police to operate in close coordination
and ensure strict enforcement of the conservation rules. The Coast Guard was
requested to have real time intelligence-sharing with the departments about any
illegal fishing. The Dhamra, Gopalpur and Paradip Port Trusts were urged to
provide seaworthy vessels for patrolling in their respective coasts.
Replying to a media query,
Wildlife PCCF Sidhant Das said this year two high-speed boats have been
procured for patrolling. The boats can run 30 km per hour and spot any illegal
fishing.
Das added that during the
nesting season, a total of 59 camps, both onshore and offshore, would be set up
at different places along the coast for detection of illegal fishing. There
would be two new camps in the Puri and Bhadrak coasts. “We will take cooperation
of local NGOs, community-based organisations and traditional fishermen.”
The Fisheries & Animal
Resource Department was asked to regulate fishing activities for traditional
fishermen as per the existing rules, added Das.
The Action Plan for 2016-17
was discussed and finalised. The All India Radio was requested to spread
messages for public awareness. While a central monitoring unit has been set up
in the Wild Life PCCF office, there would be circle-level monitoring under
direct supervision of Regional Conservators of Forests (RCCFs), Brahmapur and
Baripada. Sea patrolling would be launched from various bases near Babubali,
Agarnasi, new Devi Nasi island, Purunabandha, etc.
Each of the 59 camps would be
provided with VHF communication devices and mobile phones. APR force would be
deployed for patrolling and enforcement activities. Collectors would depute
magistrates to remain in charge of APR force placed at disposal of DFOs.
The industries and ports along
the coast were requested to comply with the lighting regulations. A web portal
under the title ‘manage.odishawildlife.org’ has already been developed for
monitoring of sporadic nesting and mortality of the turtles.

Odisha records 20% death due to lightning strikes in country