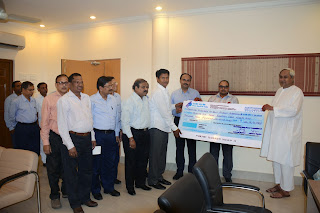 Bhubaneswar, Nov 30: The Odisha Hydro Power Corporation Ltd,
a gold rated State PSU has paid an amount of Rs 26,18,91,970 as dividend to the
State Government on Tuesday.
The cheque was handed over to Chief Minister Naveen Patnaik
at the State Secretariat by Energy Minister Pranab Prakash Das in the presence
of department Secretary and OHPC CMD Rajesh Verma, GRIDCO and OPTCL CMD Hemant
Sharma, Energy Department Special Secretary and OHPC Director (HRD) Srikant
Nayak among many other senior officials.
According to the Odisha Government policy, the minimum
dividend payout in respect of PSUs in the mining and power generation sector
should be 30 percent of post-tax profit. OHPC paid the amount of Rs 26,18,91,970
towards dividend at 30 percent of its post-tax profits earned in the year
2015-16.