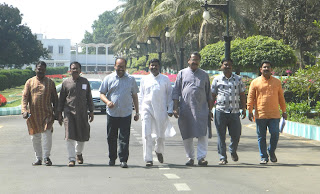 Bhubaneswar,
Mar 1: Accusing Koraput Collector-cum-District Magistrate V Jaykumar of working
like an agent of the ruling BJD, the State BJP on Wednesday petitioned before
Governor SC Jamir about the alleged arbitrary suspension and subsequent transfer
of 11 clerks of the Collectorate by the Collector for allowing Union Minister
Dharmendra Pradhan’s chopper to land at Boriguma in Koraput during panchayat
polls last month.
With
Koraput District Clerical Association’s stir protesting against the alleged unethical
act of the Collector intensifying, a delegation of BJP leaders led by party
vice-president Sameer Mohanty met the Governor seeking the latter’s immediate intervention
in the matter to resolve the administrative logjam in the tribals-dominated
district.
“The
Collector is carrying forward political intolerance agenda of State Government
and specially that of senior officials of Chief Minister Naveen Patnaik’s
office. Facilitating landing of the chopper senior BJP leader and Union
Minister Dharmendra Pradhan at Boriguma in Koraput during for panchayat polls
cannot be treated as illegal act,” said Mohanty.
Meanwhile,
the district Collector has gone on leave, sources said.
The
clerical association continued its stir protesting against the action of
Collector. The Collector had earlier suspended a Junior Clerk, Krushna Chandra
Pradhan, in the case of granting permission without informing the district
administration to Union Minister Pradhan to land his helicopter at Borigumma in
the district on February 13.
The
association opposed the decision and staged a dharna, following which 10 more
clerks were put under suspension and few transferred for negligence in work.
However,
the Collector on Tuesday withdrew his orders for suspension of 11 clerks and transferred
them to various blocks.