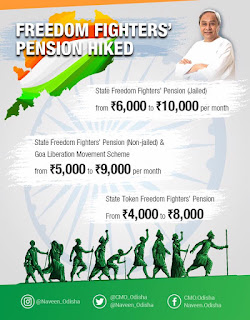 Bhubaneswar, May 5: The State Government on Friday increased
State Pension for freedom fighters across all categories by around Rs 4,000
each. They will now get nearly double the amount they have been getting with retrospective
effect from April 2017.
According to a Chief Minister’s Office (CMO) communiqué, those
freedom fighters who were jailed during freedom struggles will be entitled to
avail Rs 10,000 per month against the existing Rs 6,000 while un-jailed and those
who participated in the Goa Mukti Movement will get Rs 9,000 against the
existing Rs 5,000. The monthly token pension has also been hiked to Rs 8,000.
It was Rs 5,000.
The enhancement will come into force with retrospective
effect from April 2017. The Government had last time hiked the amount on
October 1, 2013.
“We are indebted to our freedom fighters in every way. We
are breathing the air of freedom and leading an unfettered life in a thriving
democracy only because of the untellable struggles and sacrifices of our
freedom fighters. They shed their blood and sacrificed their comforts and
families for the cause of ensuring a free nation for us,” said Patnaik in his
Facebook page.