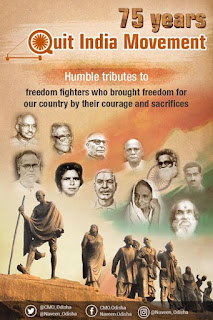 Bhubaneswar, Aug 9, 2017: Chief Minister Naveen Patnaik on
Wednesday paid homage to the martyrs and freedom fighters who dedicated their
lives to the liberation of the country from the British rule on the occasion of
75th anniversary of Quit India Movement and called upon youth to learn about
the freedom fighters and the freedom movement of the country and also in
Odisha.
“On the 75th anniversary of the Quit India Movement, I pay
homage to the innumerable freedom fighters who sacrificed their all to secure
freedom for the country. Every breath of free air that we inhale today is a
gift of blood and unimaginable suffering that they underwent in the fight for
freedom,” Patnaik posted in his Facebook page.
Hundreds of freedom fighters of our own state gave their
lives for our country even as thousands from every nook and corner joined the
movement to oust the British from our soil. Across the state, there was a
non-violent uprising which the British tried to crush with ruthless force, said
Patnaik.
“The massacre of unarmed freedom fighters including women,
who had assembled for peaceful protests against the British at Eram in Bhadrak
district, tells the tale of courage and sacrifice of our braves. We will
forever be indebted to our freedom fighters for bringing us freedom. Each one
of them is an inspiration for us,” said Patnaik.
“On this day, I call upon our youth to learn about the
freedom fighters and the freedom movement of our country and also in our state.
Their principles and values, courage and sacrifice will show the right path to
the young minds,” added Patnaik.