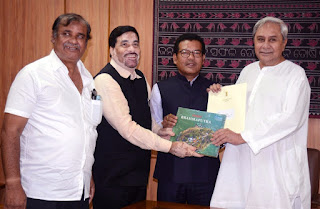 Bhubaneswar, October 31, 2017: Odisha Chief Minister Naveen
Patnaik on Tuesday announced that Odisha Government will renovate the
century-old dilapidated house of Assamese litterateur Lakshminath Bezbaroa at
Sambalpur and convert it into a memorial.
Patnaik’s announcement has put to rest speculations regarding
any possible demolition of the heritage residence of pioneering Assamese
litterateur “Sahityarathi” Lakshminath Bezbaroa at Sambalpur.
The announcement came after a delegation led by Assam Cultural
Affairs Minister Naba Kumar Doley and Media Adviser to Assam Chief Minister,
Hrishikesh Goswami met the former at the State Secretariat here.
“We respect Bezbaroa ji a lot. Odisha Government will take up
renovation and conservation of Late Laxminath Bezbaroa residence in Sambalpur
at its own expense,” Patnaik told reporters after the meeting.
Odisha Culture and Tourism Minister Ashok Panda who was
present during the meeting said that the Indian National Trust for Art and
Cultural Heritage (INTACH) would prepare the renovation plan and take up the
work.
“Initially the Odisha Government will spent Rs 50 lakh for
renovation purpose. INTACH will carry out the renovation work,” said Panda
after the meeting.
Talking to media persons after the meeting, Media Adviser to
Assam Chief Minister, Hrishikesh Goswami said that the Assam Government is
thankful and honoured to Odisha Chief Minister Naveen Patnaik for his support.
On Monday, both Doley and Goswami rushed to Sambalpur and visited
the house of Bezbaroa at the Nelson Mandela chowk in Sambalpur amid public
outcry in Assam following reports that the structure will be demolished.
Goswami said the Assam Government would provide some of the
personal belongings and literary works of Bezbaroa for preservation in the renovated
structure.
People in Assam protested after the Odisha Government ordered
dismantling of the century-old desolate house in Sambalpur to build a bridge
over Mahanadi river and a rotary created a stir in the state.
Wasting no time, Assam CM Sarbanda Sonowal deputed his
Cultural Affairs Minister Naba Kumar Doley and Media Adviser Hrishikesh Goswami
to rush the Sambalpur district Collector and Odisha CM with a plea to save the
heritage residence.
The Odisha Government has already acquired the land at Nelson
Mandela Chowk on the bank of the Mahanadi river on which Bezbaroa’s two
dilapidated buildings stand. The land has been acquired for constructing an
approach road to the second bridge over the Mahanadi.
Bezbaroa, who was a poet, writer, satirist, playwright and
children’s literature writer lived in this house located on a sprawling
two-and-a-half acre estate at Nelson Mandela Square from 1917 to 1936 while
carrying out his timber business on the side. It is currently in a state of
neglect and disrepair.