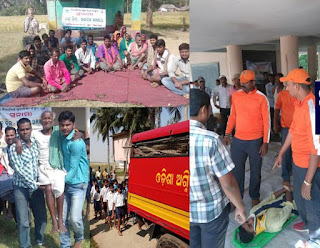 Bhubaneswar, November 24, 2017: The Tsunami mock drill
was conducted on Friday in 328 villages within 1.5 km of the coastline in 22
blocks of six coastal districts of Odisha.
The districts included Balasore, Bhadrak,
Kendrapara, Jagatsinghpur, Puri and Ganjam.
The process of mock drill started at 9.30 am with
receipt of First Test Bulletin from INCOIS by the State Emergency Operation
Centre, which was immediately transmitted to districts, blocks and other
organisations like National Disaster Response Force (NDRF), Odisha Disaster
Rapid Action Force (ODRF), INS Chilika and Indian Coast Guard.
After the alert/warning messages received from
INCOIS, it was promptly communicated to the district Collectors for taking
preparedness and evacuation measures at the village level.
The Emergency Operation Centres at district and
block levels were immediately transmitted such messages to the community
through blocks and other modes. Finally, community members executed the drill
with token evacuations and other activities.
The mock drill ended at 1.30 pm with the issue of
DE-WARNING and ALL CLEAR messages by INCOIS which was forwarded to all
concerned by the State Emergency Operation Centre.
The Tsunami Mock Drill was conducted, based on
scenario of 9.2 magnitude earthquake with epicentre at Nicobar Islands and
triggering of tsunami.
During the drill the Indian Tsunami Early Warning
Centre (ITEWC) at Indian National Centre for Ocean Information Services
(INCOIS), Hyderabad provided simulated tsunami threat information to all
coastal states of India including Odisha.
Each State/ district has evaluated the information
and disseminated to the disaster response agencies and coastal communities
participating in the drill.
The purpose of the mock drill was to enhance
tsunami preparedness, evaluate response capabilities and improve coordination
throughout the region.
The aim was to exercise all levels of the tsunami
warning and response chain, with a primary focus
on the local coastal community
level.
Senior officers from the office of Special Relief
Commissioner and OSDMA coordinated the mock exercise from the State Emergency
Operation Centre.
EOCs at district and block levels in the six
districts were involved along with district level officials from line
departments in the mock drill.
Response teams from NDRF, ODRAF and fire service
participated in this mock exercise. Indian Coast Guard, INS Chilika, Indian
Army and others also participated in the drill.
During the drill international delegates comprising
the members from 10 Pacific island nations visited Nolia Sahi of Gop block of
Puri district to witness the community evacuation procedure.
The disaster response forces also exhibited search
and rescue drills at the community level.
The Tsunami Mock Drill will help the people living
in tsunami prone areas and government officials at different levels to remain
better prepared to handle any tsunami threat in future.
The tsunami in the Indian Ocean in 2004 and
subsequent events in the Indian and Pacific oceans have brought to the
attention of the world to the urgent need to be more prepared for such events.
The important drill helped to test the current
procedures of the Indian Ocean Tsunami Warning and Mitigation System and help
identify operational strengths and weaknesses in each state and country.
Bhubaneswar, November 24, 2017: The assets
of the ruling Biju Janata Dal (BJD) has increased by 7,721 percent in 10 years between
2005-06 and 2015-16, an analysis by Odisha Election Watch (OEW) reveals.