Skip to content
New Delhi, November 26, 2017: Chief Minister Naveen Patnaik on
Sunday visited the All India Institute of Medical Sciences (AIIMS) in New Delhi
to enquire about the health conditions of Jaga and Kalia.
Jaga and Kalia-craniopagus twins, joined at the head-were successfully
separated on October 26, 2017 after a marathon surgery that lasted for over 16 hours
at the AIIMS, New Delhi.
During his visit to AIIMS, the Chief Minister met both the
children and gifted them some soft toys for them to play with. He also met their
parents, Bhuyan Kanhar and Pushpanjali Kanhar and assured all help. 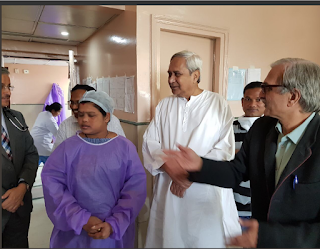 Both the parents expressed their gratitude to the Chief
Minister for all the support that has been provided to them by the Odisha Government.
The CM also discussed the health condition of the children
and about their ongoing treatment with AIIMS Director Prof Randeep Guleria and
Prof Ashok Mohapatra.
“Both the children are recuperating well and are being
constantly monitored. Jaga is far more stable while Kalia who is still under
intensive care is improving gradually. We hope that he will also stabilise fast,”
said AIIMS Director Prof Randeep Guleria.
The CM thanked Prof Guleria and Prof Mohapatra and the entire
team of doctors for performing an incredible job and for their untiring efforts
in saving the precious lives of the two little children from Odisha.
The 29-month-old twins, who were joined at head, were
separated following a 16-hour-long surgery at the AIIMS. A team of around 40
specialists from the institute’s neurosurgery, neuro-anaesthesia and plastic
surgery departments performed the marathon surgery successfully on October 26
under the direct supervision of AIIMS Neuroscience Centre chief Prof Ashok
Kumar Mohapatra.
Jaga and Kalia are joined from their heads by birth. In
medical term, kids with such sort of deformity are known as ‘craniopagus
conjoint twins.’ It is an extremely rare condition found in 1 in 2.5 million
births in the world. Such deformity afflicts one in 30 lakh children, of which
50 per cent die either at birth or within 24 hours. Surgery is feasible only on
25 per cent of the survivors, while the rest continue to live with the
condition.
On July 19 Chief Minister Naveen Patnaik had sanctioned Rs 1
crore for the treatment of the twins.
They were admitted to AIIMS on July 14 and the first phase
operation was successfully conducted on August 28 at the Odisha Government’s
initiative. The first phase of the surgery included experts from Japan.