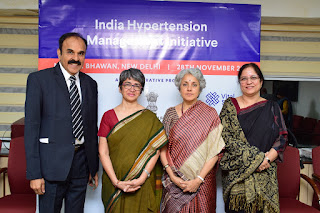 Bhubaneswar, November 29, 2017: India has launched India
Hypertension Management Initiative (IHMI) with an aim to reduce disability and
death related to cardiovascular disease (CVD), the leading cause of death in
India, by improving the control of high blood pressure (hypertension), reducing
salt consumption and eliminating artificial trans-fats, leading risk factors
for CVD.
The Secretary, Ministry of Health and Family Welfare (MoHFW)
and Secretary, Department of Health Research (DHR) and Director General, Indian
Council of Medical Research (ICMR) launched the initiative.
IHMI is a collaborative project between ICMR, MoHFW, State
Governments, World Health Organization (WHO), and Resolve to Save Lives, an
initiative of Vital Strategies.
A launch event at the Ministry on Sunday was co-chaired by
Preeti Sudan (MOHFW Health Secretary), Dr Soumya Swaminathan (Secretary, DHR
and DG, ICMR).
Around 200 million adults in India have high blood pressure,
yet control rates for the condition remain low. Studies suggest that in rural
areas in India, only one quarter of people with hypertension are aware of their
condition, and only around 10 percent have their blood pressure
controlled.  In urban areas, around 40
percent of people with hypertension are aware of their condition, and only
around 20 percent have their blood pressure controlled .This initiative aims to
strengthen the cardiovascular disease component of the government’s National
Program for Control of Cancer, Diabetes, Cardiovascular Diseases and Stroke
(NPCDCS). It will focus on strengthening hypertension management and monitoring
at the primary health care level, within the existing healthcare system, and is
aligned with WHO’s Global HEARTS Initiative and national guidelines.
The ICMR, PHFI and IHME’s ‘India: Health of the Nation’s
States’ report, published this month, reports that every state now suffers  from a higher burden of Non Communicable
Diseases (NCDs) and injuries than infectious diseases and finds that the risk
factors for heart attack and stroke are increasingly prevalent in every state.
“Hypertension is the single biggest risk factor for heart
attacks and stroke in India, and often detected only after deadly complications
have occurred,” said Dr Soumya Swaminathan,
Secretary, DHR and Director-General, ICMR, Government of
India said, “This initiative will enable state governments – working alongside
the other IHMI partners – to improve treatment of hypertension to achieve our
shared goal of reducing preventable deaths from cardiovascular disease.”
The Government of India has adopted a national action plan
for the prevention and control of NCDs with specific targets to be achieved by
2025, including a 25 percent reduction in overall mortality from CVD, a25
percent relative reduction in the prevalence of raised blood pressure and a 30
percent reduction in salt/sodium intake.
“Approximately 5 crore additional people will need to have
their blood pressure effectively treated if the Government is to meet its
targets on hypertension and CVD mortality,” said Preeti Sudan, Health
Secretary.
“The IHMI, alongside other policy initiatives, will ensure a
continuum of carefor patients identified by the recent NPCDCS’s
population-based screening programme that aligns with the government’s
commitment to universal care.”