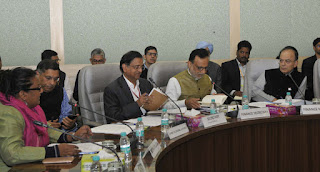 New Delhi, December 6, 2017: Union Finance Minister Arun
Jaitley on Wednesday held his third pre-Budget Consultation meeting with
representatives of Indian Trade and Industry in here asked business leaders for
making investments in infrastructure sector to build a stronger India.
Highlighting the importance of investment in infrastructure
sector, the Finance Minister said the Government has taken various steps and
has also set-up National Investment and Infrastructure Fund (NIIF) among others
in order to boost investment in this sector.
Along with the Union Finance Minister, the Pre-Budget
Consultative meeting with the business leaders and representatives of various
chambers of Indian Trade and Industry was also attended by Dr Hasmukh Adhia,
Finance Secretary, A.N. Jha, Secretary, Expenditure, Subhash Chandra Garg,
Secretary (Economic Affairs), Ramesh Abhishek, Secretary, DIPP, Dr Arvind
Subramanian, Chief Economic Adviser (CEA), Sushil Kumar Chandra, Chairman,
CBDT, Vanaja N Sarna, Chairperson, CBEC and Atul Chaturvedi, Director General,
Directorate of Foreign Trade (DGFT), Ministry of Commerce among others.
Various suggestions were made by the business leaders and the
representatives of different Chambers of Indian Trade and Industry among
others. The major suggestions/demands included permitting the purchase of
Banks’ Recapitalization Bonds by the Institutes and the public at large,
reducing Government stakes in Public Sector Banks(PSBs), allowing banks to
securitize their loans and sell the same, setting-up of Land Bank Corporation
for monetization of Government lands including the land belonging to Army,
Railways and Public Authorities among others.
Other suggestions include setting-up of National Power
Generation Corporation and creation of National Innovation Fund with initial
corpus of Rs 10,000 crore to promote innovation and Out of Box Ideas;
setting-up of Empowered Group of State Agricultural Ministers to implement
Agricultural Reforms.
Other suggestions include reduction in Dividends Distribution
Tax and to bring down the maximum rate of Income Tax to 20% to encourage
investment, at par with other development countries. It was also suggested to
create Regulations Free Export Zone for setting-up 100% Export Oriented Units
both by domestic and foreign investors which in turn would help not only in
creating employment opportunities but also in earning foreign exchange for the
country.
Another suggestion was made to bring a ‘Scrapes Scheme’ to
take more than 15 year old heavy commercial vehicles off the road since demand
in this sector is at its peak today. This will help in generating lot of
employment opportunities as it will bring about large scale private investment
in this sector.
Another suggestion was made for introduction of system of
e-wallet with effect from 1st April, 2018 under GST, extension of Duty Draw
Back System for GST for a year, GST on freight for carrying fruits and
vegetables among others.
Another suggestion was made for incentivizing the industry
for larger women participation in industrial jobs including subsidy to industry
for providing transportation facilities for women and incentives for running
women dormitories among others.

Free laptops for 15,000 meritorious Plus II students this year in Odisha