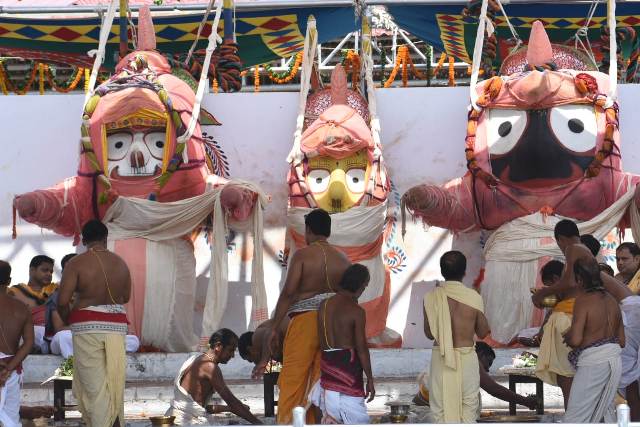 Puri: Amid tight security, the famous Snan Yatra of Lord Jagannath and His siblings was being held in this pilgrim town of Odisha on Monday with fanfare, religious fervour and.

Snan Purnima is a major ritual before the annual nine-day long Rath Yatra, scheduled to begin on July 4.

On this day the deities are taken in a Goti Pahandi (the ritual in which the deitiesare brought out of the sanctum sanctorum one after another) to the ‘Snan Bedi’ (Bathing platform) situated near the Anand Bazaar on the temple premises where they are bathed by the servitors publicly with 108-pitcher aromatic water.

Following the holy bath, the sibling deities give darshan to the devotees in Gaja Besha or (elephant attire) on the Snan Bedi.

After the holy bath, the deities fall sick and remain in hibernation for 14 days. During this period, servitors treat them with various kinds of healing herbs and preparations.

During this period devotees are also denied darshan of the ailing deities.

As many as 42 platoons of police, including three commandants, nine Deputy Commandants or ASPs, 37 Inspectors, 16 DSPs, 225 officers, 42 platoon police and 550 home guards have had been deployed to make the grand event incident-free.