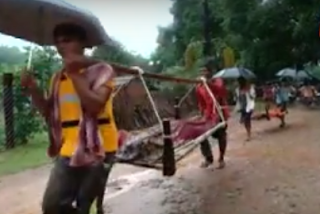 Bhubaneswar, July 9: Five
civilians, including two women, two men and a child were killed in a crossfire
between Maoists and security forces in the Malapanga forest near Mugudumaha in
Kamdhamal district late on Friday.
The mishap occurred when
victims were returning from Kuttamagarh to their village Mugudumaha by an
auto-rickshaw when the vehicle came in the line of firing that was on between
the security personnel and the ultras in the dense forest.
The deceased were
identified as Kukula Digal, former Naib Sarapanch of Parampanga panchayat, Luta
Digal, Timiri Mallick, Bringuili Mallick and Midialli Mallick, sources said. Besides
the child, all other victims were aged about 30-40 years-old.
Now the question that
inevitably arises that whether the security personnel adopted the standard
operating procedure (SOP) by blocking the route before entering into the gun battle.
Earlier too, a couple
was killed in a Maoists-security forces encounter in Kandhamal district while nine
were killed in Kalahandi and one in Nuapada districts recently.
Terming the incident as
unfortunate, Kamdhamal SP Pinak Mishra said a thorough probe will be conducted into
the circumstances leading to the civilians’ killing.
Angry over the killing
of the innocent civilians and their co-villagers , locals blocked the
Gopalpur-Raipur NH-224 near Paramapanga demanding immediate withdrawal of CRPF
personnel from the area and Rs 50 lakh compensation to the kin of the deceased.
Meanwhile, Chief
Minister Naveen Patnaik ordered a judicial inquiry into the incident and
announced compensation of Rs 5 lakh for the family of each deceased.
He also announced jobs
for the kin of the deceased, besides directing the concerned authorities to
include the bereaved families under the social security scheme of the State Government.

All state-owned universities, colleges to be digitized in Odisha