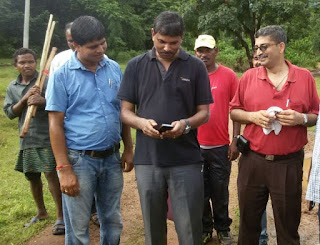 Jajpur, Aug 4: A two-member
team of the Union Ministry of Tribal Affairs (MTA) on Thursday visited Nagada
in Jajpur district to assess the situation of the village, where 19
malnourished Juang children died in last four months and expressed its unhappiness
over non-distribution of land pattas to the residents under Forest Rights Act (FRA).
“I am surprised to know
that the tribals here have not received land pattas under Forest Right Act. It should
not happen,” said team head G Ramesh Kumar.
Kumar, Ministry’s Joint
Secretary also expressed dissatisfaction over the failure of the Jajpur district
administration in handling malnutrition cases.
The team also visited
Nagada, Uppar Nagada, Bhuisala and other remote villages and took stock of Anganwadi
Centres, fair price shops and primary health centres in Sukinda. The members interacted
with villagers on the distribution of PDS food grains.
The team suggested the
district administration to provide pucca houses and latrines to the tribals.
Kumar also informed
that development programmes are necessary for the socio-economic development of
the people in Nagada village.
Local tehasildar, BDO
and other senior officials were present at Nagada during the visit of the team.

DGP for dignified disposal of unidentified bodies with Imprest Money