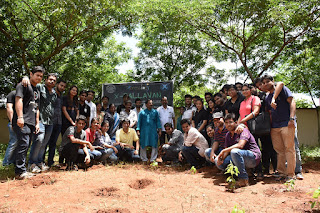 Bhubaneswar, Aug 28: Students of the Xavier
Institute of Management, Xavier University, Bhubaneswar in association with the
State Forest Department and the CK Group of Companies on Sunday organised a
sapling plantation and donation drive called ‘X-Pallavan’ in the city.
Bhubaneswar North MLA Priyadarshi Mishra and BMC
Mayor Anant Narayan Jena inaugurated the event in front of the Fortune Tower
here.
MLA Mishra appreciated the efforts of the students
and called for a joint effort to make the city green and clean. Jena pointed
out that Bhubaneswar has become a Smart City elect and the initiative of the
XIMB for building a green Bhubaneswar is appreciated.
A waste land opposite the Fortune Tower was cleared
and sapling plantations were done there.
In the afternoon, the XIMB students took the
initiative to different parts of the city. The sapling donation drive was
organised at eight locations in and around Bhubaneswar simultaneously. The
locations were Master Canteen Square, Kalpana Square, CRP Square, Vani Vihar
Square, KIIT Square, Forest Park, Pal Heights and Chandrasekharpur Petrol Pump.
Kiosks were set up at these locations to distribute
plant saplings to the public passing by. There was enthusiasm observed among
the public who flocked these kiosks to get free saplings. The public believed
that such initiatives would boost awareness and inspire people to plant more
trees.

The
organizing team of “Xpressions” planned and organised the event.