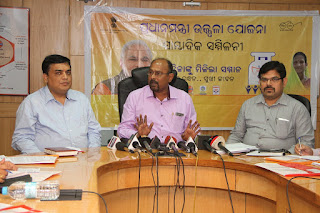 Bhubaneswar, Sep 6: The
Union Petroleum and Natural Gas Ministry has decided to provide LPG connections
to 75 lakh families in Odisha by December 2018.
To achieve the target the
Ministry has decided to release 30 lakh new LPG connections under Pradhan
Mantri Ujjwala Yojana (PMUY) and 10 lakh under normal release (APL).
IOCL Chief LPG Manager
and PMUY Nodal Officer G Swaminathan on Tuesday told reporters here that functions
will be held in panchayat levels across the State where LPG connections will be
provided to the beneficiaries.
“Union PNG Minister
Dharmendra Pradhan has strictly instructed to ensure LPG connections to at
least 70 percent households in Odisha by December 2018. For smooth execution of
the initiative and also meet the target, we have decided to orgnaise PMUY
functions in panchayats closer to the beneficiaries,” said Swaminathan.
Distributors and
distribution companies will talk to the villagers directly thereby keeping
middlemen at bay. The experts will also educate and make aware the people about
the safe use of gas, added the officer.
The scheme is aimed at
replacing the unclean cooking fuels mostly used in the rural India with the
clean and more efficient LPG (Liquefied Petroleum Gas).
He said that the LPG
connection percentage has increased to 40 percent in the State now. Earlier,
only 24 percent households have LPG connections in Odisha.
He nearly 15,000 new
connections were provided to beneficiaries between July and August this year
across the State.
Notably, the Union
Government has set a target of 5 crore LPG connections to be distributed to the
BPL households across the country under the scheme.