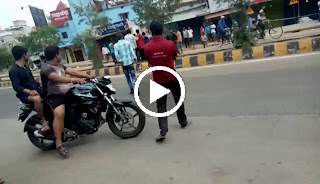 Bhubaneswar, September 18, 2017: The scale of street
hooliganism during Monday’s BJD-sponsored bandh protesting the rising prices of
petrol, diesel and cooking gas left the people of the State stunned amid the assurance
of the ruling party that the hartal would be a ‘peaceful’ one.
Bandh-enforcers armed with sticks and rods attacked cars, two
wheelers, auto-rickshaws and snatched drivers’ keys and blocked traffic at
various major routes and squarers across Odisha diametrically opposite to that
of party’s ‘peaceful’ five-hour ‘hak for hartal’ (protest for rights).
Protestors were seen attacking women and disallowing ambulances
to ferry patients to hospitals. In almost all major junctions of the State, particularly
in State capital Bhubaneswar, the bandh-enforces blocked road by buring tyres. They
also observed rail rook.
However, the BJD termed the violence as an outburst of public
against the price hike of petroleum products resulting in the price rise of essential
commodities.
“It was the result of the public outburst. Neither BJD nor
its president and Chief Minister Naveen Patnaik believes in violence,” argued
BJD vice-president Debi Prasad Mishra at a news conference at the party State
headquarters after the five-hour bandh ended at 12 noon.
Senior BJD leader Baijayant Panda too condemned the way his
party workers indulged in violence. The Lok Sabha member took to the social
media to condemn the shameful act of the BJD ‘goons’.
Posting a photo where the BJD workers were seen obstructing
an ambulance to pass by during five-hour the hartal, Panda tweeted, “Shameful.
I dissociate from & condemn this (I can’t on party’s behalf since I’m no
longer the spokesperson). These goons must face action,” tweeted Panda.
“This isn’t the party I assisted NP to found 20yrs ago. I’m
ashamed & angered by this. Biju babu wd’ve been too. Armchair strategists
must go,” Panda further tweeted.
Union Petroleum and Natural Gas Minister Dharmendra Pradhan
too condemned the hooliganism of the BJD and demanded stern legal action
against the hooligans.
The BJD observed a State-wide five-hour peaceful hartal
between 7 am and 10 noon today to protest the rising prices of petrol, diesel
and cooking gas across the country. However, the hartal turned out to only be a
farce as the protestors attacked the commuters and even did not spare
ambulance, patients, women and elderly people.
Meanwhile, DGP Dr Rajendra Prasad Sharma said that the
BJD-sponsored hartal ended peacefully raising many eyebrows.
On the other hand, protesting against the goondagiri unleashed
by the ruling dispensation in the State in the name of ‘hak pain hartal’ today,
the Odisha Bharatiya Janata Yuva Morcha, the youth wing of the BJP announced to
gherao Superintendent of Police (SP) offices across the State on Tuesday.