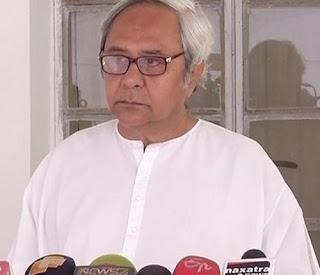 Bhubaneswar, October 12, 2017: Expressing displeasure
over the East Coast Railway’s (ECoR) decision to divert an existing Rajdhani
Express and run the same via Sambalpur, Chief Minister Naveen Patnaik on
Thursday wrote to Union Minister of Railways Piyush Goyal seeking a new train
between Bhubaneswar-Delhi Rajdhani Exp via Sambalpur instead of diverting the
existing one.
The CM’s letter came two days after the East Coast
Railway (ECoR) in a recent statement informed that the existing Bhubaneswar-New
Delhi Rajdhani Express train 20817/20818 via Cuttack, would run via Sambalpur
City and Jharsuguda once in a week from February 10, 2018 from Bhubaneswar.
“Odisha in general
and the western side of Odisha in particular has been a neglected area for the
railways since long, even though Odisha continues to give the highest revenue
to the Indian Railways year on year. I have been asking Railways to also
introduce Rajdhani service from Bhubaneswar to New Delhi, via Sambalpur. I was
happy that after a long time Railways agreed to run a Rajdhani train via
Sambalpur and the same was confirmed by you during the discussions we had on
27.09.2017 in Rail Bhawan,” Patnaik wrote.
“However, it is disappointing to note that instead of
giving Odisha a new train, East Coast
Railway is planning  to  divert
an  existing  Rajdhani Express  and
run  the  same
via  Sambalpur,  once
a  week. As this will reduce the
service of Rajdhani for the existing route, I would request that this decision
may be reviewed and a new Rajdhani train may be given to Odisha, thereby
restoring the frequency of the diverted train,” Patnaik stated.