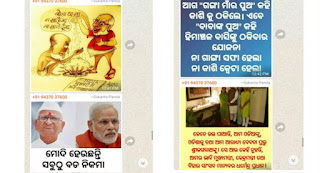 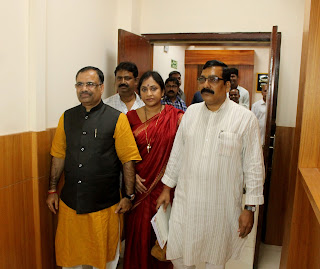 Angry over such conduct of a Government servant, a
delegation of four BJP leaders on Monday met Chief Secretary Aditya Prasad Padhi here at the State Secretariat and submitted a memorandum to him demanding legal action against Panda.
Party State secretary Lekhashree Samantsinghar, spokesperson
Golak Mohapatra, Sudipta Ray and advocate Pitambar Acharya, who recently joined
the saffron camp, met the Chief Secretary.
“He (Sukanta Panda) has violated Conduct Rules 5 and 7,
by posting derogatory remarks against Prime Minister and doing political work.
We have asked Chief Secretary to take appropriate action against him and he too assured us of action,” said
Pitambar Acharya.
In July last year, Panda had also landed in controversy
after he added Himansu Kar alias Bapi, who was interrogated by the EOW and the
Vigilance in connection with his involvement with Motilal Gouda, in the
WhatsApp group he created for journalists to share the CM’s statements and vice
versa.
Now question is being raised as to how a Government
servant even being the CM’s PRO is continuously behaving like a political
person thereby questioning the ‘clean image’ of Chief Minister Naveen Patnaik
directly or indirectly.