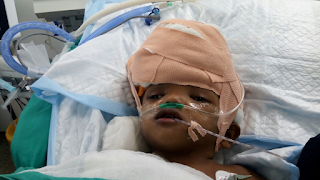 Bhubaneswar,
November 3, 2017: Jaga, one of the conjoined twins from Odisha whose heads were
separated on October 26 at the AIIMS, New Delhi, was shifted to private ward
from the ICU in the sign of improvement of his health condition.
He was taken off
the ventilator on Wednesday, even his twin brother Kalia continue to be in the
ICU.
The conjoined
twins had undergone a 16-hour surgery for separation at the All India Institute
of Medical Sciences (AIIMS), New Delhi on October 25.
Now Jaga is
conscious and recognises the mother, responding to questions of her mother,
AIIMS Neuroscience Centre chief and neurosurgeon Prof AK Mohapatra had said on Wednesday.
“Jaga’s cardiac
and kidney function has further improved,” said AIIMS doctors. The other child
Kalia is still on the ventilator but his condition is said to be stable. Kalia
will not be discharged soon from ICU because of his weakness and fits problem.
Jaga and Kalia
are joined from their heads by birth. In medical term, kids with such sort of
deformity are known as ‘craniopagus conjoint twins.’ It is an extremely rare
condition found in 1 in 2.5 million births in the world. Such deformity
afflicts one in 30 lakh children, of which 50 per cent die either at birth or
within 24 hours. Surgery is feasible only on 25 per cent of the survivors,
while the rest continue to live with the condition.
On July 19 Odisha
Chief Minister Naveen Patnaik had sanctioned Rs 1 crore for the treatment of
the twins.
They were admitted
to AIIMS on July 14 and the first phase operation was successfully conducted on
August 28 at the Odisha Government’s initiative. The first phase of the surgery
was done which included experts from Japan.

Winter Session of Parliament from tomorrow