Skip to content
Bhubaneswar:
Oppositions Congress and BJP on Tuesday took to street demanding resignation of
Chief Minister Naveen Patnaik in the Itishree Pradhan molestation and murder
case. They too demanded that the case be handed over to CBI for an impartial
inquiry.
While
the Mahila Congress took out a rally at the Mahatma Gandhi Marg led by Pradesh
Congress Committee president Jayadev Jena here, BJP staged a dharna before Raj
Bhawan and submitted memorandum to Governor, holding the State Government
responsible for the tragedy.
“The
dying declaration of Itishree exposed the fact,” said Jena, claiming that she had
pointed ginger at Chief Minister Naveen Patnaik and his administration for her
death.
Demanding
immediate intervention of the Governor, the BJP led by its State president KV
Singh Deo too submitted a memorandum to him highlighting the State Government’s
incapability, insensitivity and callousness in the teacher molestation and murder
incident.
He also
demanded a CBI probe into the case.

DGP for dignified disposal of unidentified bodies with Imprest Money 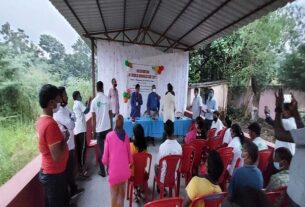