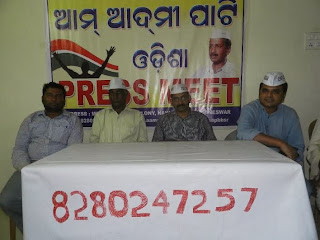 Bhubaneswar: The Aam Aadmi Party (AAP)
Odisha unit on Friday set a target enorl 1 lakh youths in the State within a
period of one month to expedite its anti-corruption movement. The membership
drive will continue till January 15.
Addressing
mediapersons here at the State party office, AAP State Committee convener
Nishikant Mohapatra said, “We invite all good people irrespective of students,
government employees, social activist, youth and women to come together to
clean the political system and also to help AAP in the form monetary,
physically and psychologically.”
Mohapatra
urged people not to waste their votes either on the ruling BJD and opposition
Congress and BJP in the State as they all have failed to ensure a
corruption-free Odisha.
“The
Delhi victory
proved that people want a leadership which is determined for a corruption-free
society. Hence, we appeal to honest people from all spheres and political
parties, including the Congress and the BJP, to join our party in the fight
against corruption,” said Mohapatra.