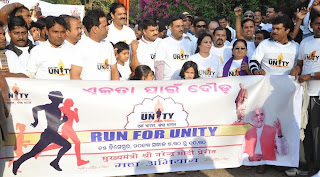 Bhubaneswar:
As a part of the campaign to construct the world’s tallest statue of Sardar
Vallabhbhai Patel known as ‘Statue of Unity,’ the ‘Run for Unity’ marathon was organized
at Bhubaneswar, the capital of Odisha. The marathon was flagged off by former
Director General of Police Amiya Bhusan Tripathy.
It
was started off from Forest Park to Lingaraja Temple and held at over 37 places in the state.
People from different walks of life participated in the marathon with full of
enthusiasm. State BJP unit president KV Singh Deo, Prasanna Mishra, Dilip
Mohanty, Samir Mohanty, Umesh Khandelwal, Jaggannath Pradhan, Simantin Jena,
Himmat Patel, Mahendra Gupta were among those participated. Recently, the
Gujarat delegation headed by Ganpat Vasava, Forest
and Environment Minister visited various social organizations and leaders the
State appealing to make the programme a big success. 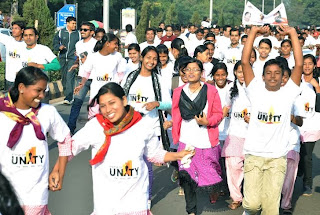 It
is a matter of pride that the ‘Statue of Unity’ with an inspiration of Gujarat
Chief Minister Narendra Modi will be erected with an aim to represent the noble
principles and great deeds of Sardar Patel for the ages to come.  Patel courageously led to merging 565
princely states at the time of independence in order to make India the
united nation and also had taught inspirational lessons of patriotism by
breaking the barriers of religion and caste.
Gujarat
Government organized ‘Run for Unity’ marathon across the country to pay glowing
tribute to the real patriot son of Mother India.
In
Gujarat, Chief Minister Narendra Modi wonderfully inaugurated ‘Run for Unity’
marathon at Baroda
with an aim to unite hundreds of thousands of citizens of the nation.  The ‘Run for Unity’ marathon has been
organized in more than 1000 places across various states of the nation, in
which large number of people with full of enthusiasm took part. 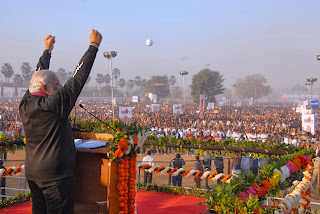 The
programme ‘Run For Unity’ was organized on the death anniversary of Sardar
Vallabhbhai Patel- the architect of modern India’s unity and integrity; was
given full support by the people of Odisha.