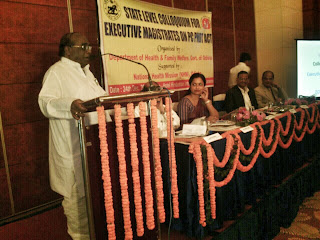 Bhubaneswar:
Emphasizing on long-term solution to curb illegal sex determination and female
foeticide in the State particular coastal districts, Health and Family Welfare
Minister Damodar Rout asked Executive Magistrates to give highest priority for
the strict implementation of Pre-Conception and Pre-Natal Diagnostic Techniques
(PCPNDT) Act through strict vigil on misuse of the technology and making people
aware about the impact of poor sex ratio.
“As
per statistics, the rate of sex ratio in tribal districts is increasing while the
same is decreasing in coastal districts of the State. While the sex ratio of
Nayagarh, Dhenkanal and Angul stood at 904, 925 and 937 as per 2001 census, it
decreased to 855, 877 and 889 in 2011 census,” the Minister told Sub-Collectors,
Teshildars and Executive Magistrates of 25 districts while addressing  the colloquium for Executive Magistrates on
PCPNDT Act on Tuesday.
Strict
implementation of PCPNDT Act is one of the main methods to check the
practice.  Hence, the Executive
Magistrates play a greater role in implementing the same, besides ensuring awareness
campaigns at grass root level.