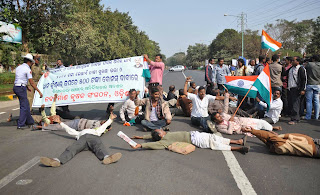 Bhubaneswar: As
many as 26 agitating members of the Nava Nirman Krushak Sangathan, a farmers’ organization
fighting for the cause of farmers in the State, were arrested by the police for
obstructing Chief Minister Naveen Patnaik’s cavalcade here in front of Jayadev
Bhawan at around 11 am on Tuesday.
The incident took place while Patnaik was on his way to the
secretariat when some agitating members of the farmers’ outfit holding placards
and shouting slogans suddenly came running in front of the convoy and blocked
the road just in front of Jayadev Bhawan.
However, the agitators could not reach the Chief Minister’s
car due to the prompt action of the security personnel. 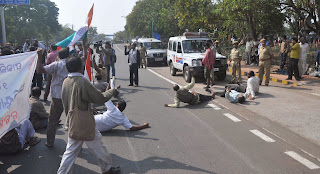 However, the CM’s convoy changed the route and reached the
secretariat through its back gate.
Meanwhile, Commissioner of Police Dr Rajendra Prasad Sharma
warned stringent action against the trouble makers.
“There was initial information that a group basically
comprising rowdy elements may create some kind of demonstration near the
residence of the CM and we had taken measures for that. But unfortunately they
created problem on the route. What I have ascertained that all the 26 trouble
makers have been arrested by us and a case has been registered. This is a
criminal incident and we’ll take stringent action against them,” said Sharma.
Notably, the outfit members who have been staging demonstration
at Dharana site in front of Assembly for nearly a month since the beginning of
the winter session of the Assembly demonstrated in the visitors’ gallery of the
House and shouted slogan against the Government for its anti-farmer policy.
The farmers’ body has been demanding Rs 500 as bonus per
quintal of paddy and Rs 2,000 as pension for all Phailin-affected farmers.

Services of south bound trains from Kolkata through Bhubaneswar extended