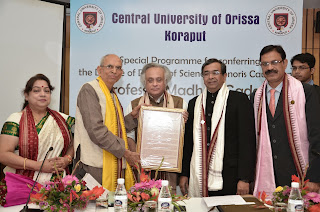 Bhubaneswar: The Central University of Odisha (CUO) conferred the Degree of
Doctor of Science (Honoris Causa) upon Professor Madhav Gadgil, an eminent ecologist and environmental scientist.
Union
Rural Development Minister Jairam Ramesh conferred the Degree upon Gadgil in a special programme
organised by CUO at India International
Centre (IIC), New Delhi on Sunday.
CUO VC Dr Surabhi
Banerjee among
many dignitaries was present during the ceremony.
Prof
Gadgil has been largely responsible for introducing careful quantitative
investigations in ecology and animal behaviour as well as viewing humans as an
integral component of ecosystems to India. He founded the Centre for
Ecological Sciences at Indian Institute of Science, Bangalore, which has developed strong
traditions of working with other researchers, teachers, policy makers as well
as NGO workers, farmers and other citizens throughout the country. This has led
to innovative experiments of involving High School and College teachers and
students in inventorying and monitoring of biodiversity.
Gadgil
has been a lcturer in Biology at
Harvard, a distinguished Indo-American Lecturer at UC Berkeley and has been
elected to all the Science Academies of India, the Third World Academy of
Sciences and the U.S. National Academy of Science. He is an Honorary Member of
the British and American Ecological Societies. He is a recipient of
Shantiswarup Bhatnagar and Vikram Sarabhai Awards, Volvo Environment Prize and Harvard University’s GSAS Centennial Medal,
Karnataka’s Rajyotsava Award and Padma Shri as well as Padma Bhushan by the
President.