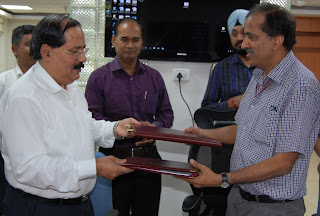 Bhubaneswar, July 18: Navratna
CPSE National Aluminium Company Limited (Nalco) has signed an MoU with the Union
Mines Ministry regarding financial and non-financial targets for the financial
year 2016-17.
The MoU was signed between
Union Mines Secretary Balvinder Kumar and Nalco CMD Dr Tapan Kumar Chand in New
Delhi on Monday. The agreement was formulated as per the new DPE guidelines and
finalised after discussions with both Inter-Ministerial Committee as well as Ministry
of Mines.
As per the MoU, the
target for revenue from operations, excluding excise duty, has been fixed at Rs
7,100 crore. The MoU has also set higher targets for production of both alumina
and aluminium as compared to the previous fiscal.
Nalco has set an annual
production target of 21.30 lakh tonnes of alumina and 3.85 lakh tonnes of
aluminium. It may be mentioned that the company had produced 19.53 lakh tonnes
of alumina and 3.72 lakh tonnes of aluminium in 2015-16.
Nalco has also set a
Capex target of Rs.1021 crore, which includes projects like development of
Utkal D & E Coal Blocks, Wind Power Projects of 50 MW each in Maharashtra
and Rajasthan, addition of 5th stream in the existing Alumina Refinery at
Damanjodi, Koraput, a 20 MW Solar Power Project in Madhya Pradesh and other
modernization activities.
Union Mines Ministry
Joint Secretary NB Dhal, Nalco Director (P&T) NR Mohanty, Nalco Director (Finance)
KC Samal, and other senior officials of the Ministry and Nalco were present on
the occasion.