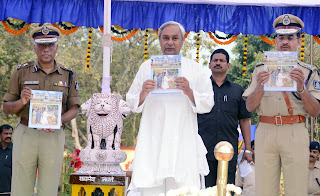 Bhubaneswar: Chief
Minister Naveen Patnaik on Tuesday said that the proposal of creation of a post
of DCP, Traffic for the twin cities, Bhubaneswar
and Cuttack with modern gadgets for
controlling and managing traffic system is under active consideration of the
government.
“The Government is seriously considering the need of
additional manpower and other resources required by the Commissionerate to
enhance its capabilities,” said Patnaik while attending the 6th Raising Day
function of the Commissionerate Police here at 7th
Battalion ground.

The Chief Minister also took the salute at a colourful
parade staged to mark the occasion.
Patnaik also formally linked the website of the
Commissionerate Police with the social media sites, a move designed to take the
police-public relations to a more intimate and effective level.
The Chief Minister also felicitated police personnel for
their hard work, sincerity and devotion to duty in their respective categories
during the year 2013.
DGP Prakash Mishra, Twin City Police Commissioner Dr
Rajendra Prasad Sharma and many senior officers of the state police were
present during the foundation day celebrations.