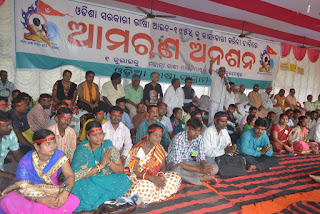 Bhubaneswar, July 6: With the State Government not
responding to the fast-unto-death agitation by the activists of the Odia Bhasa
Sangram Samiti at least on humanitarian ground, the Samiti on Monday threatened
to take law into its own hands.
Samiti activists have resorted to fast-unto-death since July
1 at Mahatma Gandhi Marg near the State Assembly here demanding official use of
Odia language.
Samiti convenor Sankarsan Parida told reporters that they
would resort to a State-wide civil disobedience stir if the Government fails to
implement the Odisha Official Language Act 1954 in next two days.
A large number of people from different walks of life under
the leadership of Barendra Krushna Dhal and Subhas Patnaik on Monday resorted
to civil disobedience movement at the hunger strike site to press the demand.
“Many aged people like Gajanan Mishra and Ajay Nayak, a
diabetic patient, are on hunger strike. Unfortunately, the Government is
sitting idle instead solving the issue at least on humanitarian ground,” rued
Parida.
He also slammed the Government and the Odisha Public Service
Commission (OPSC) for not preparing question papers in the regional language.
“We will continue to raise our voice against the the
Government’s illegal, undemocratic and unconstitutional neglect of the Odia
language and the society at large,” said Parida.