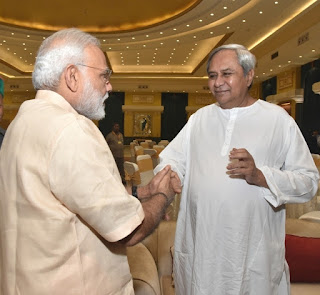 Bhubaneswar, July 16: Chief Minister Naveen Patnaik on
Saturday urged Prime Minister Narendra Modi not to allow any upper-catchment
projects in Mahanadi basin as planned by the Chhattisgarh Government to
safeguard the interests of millions of farmers in Odisha.
He also drew the attention of the PM to the fact of Centre
declaring Polavaram project as a national project despite its serious
consequences on the livelihood of a large number of tribal families in Odisha
and repeated requests of the State to the contrary.
Speaking at the inter-State Council meeting presided
over by Modi at the Rastrapati Bhavan in New Delhi. Chief Minister of almost
all the States who are members of the Council also participated in the meeting.
“My Government has opposed any move with regard to upper
catchment projects in Mahanadi basin without consulting our State. Mahanadi is
the lifeline of Odisha and it contributes maximum irrigation in our State,”
said the Chief Minister.
Maintaining that lives and livelihood of the farmers
of fifteen districts- Bargarh, Jharsuguda, Sambalpur, Sundergarh, Bolangir,
Sonepur, Boudh, Angul, Cuttack, Kendrapara, Jagatsinghpur, Jajpur, Puri,
Nayagarh and Khurda are fully dependent on Mahanadi, Patnaik urged the PM to
take note of these facts and not allow any upper catchment projects in Mahanadi
Basin without consulting our State and help in safeguarding the interests of
millions of farmers of our State for whom Mahanadi river system is the
lifeline.
“In fact, River Mahanadi has a direct impact on more
than 50% of our population and indirectly through subsidiaries the Mahanadi
System has an impact on around 65% of the population of our State. From time
immemorial the people of Odisha have an emotional, cultural and organic
relationship with the Holy Mahanadi river,” said the Chief Minister.
The Chief Minister said the inter-State Council
should meet regularly at shorter intervals to deliberate on critical issues
concerning Centre-State relations.
Patnaik stated that the recommendations of the Punchhi
Commission on Centre-State relations have been duly considered by Odisha and
the views of the State were furnished to the Central Government in April 2015.
He underlined the need to improve bank coverage in
the uncovered gram panchayats of the State in a time-bound manner and to
expedite the rollout of Bharatnet project to provide broadband connectivity up to
gram panchayat level.
Stating that the Leftwing extremism poses the
biggest threat to the internal security of the State, he urged the Centre to
ensure a balanced and equitable deployment of Central forces among the concerned
States in order to prevent cross-border spillage of the Maoists. He also asked the
Centre to restore the earlier funding pattern under the modernisation programme
of police force.
He reiterated the State’s demand to raise the minimum
support price (MSP) of paddy to Rs.2500 per quintal. He said an increased MSP
would mitigate the sufferings of farmers.
Patnaik stated that the discontinuance of Central assistance
for the Special Plan for KBK, Backward Region Grant Fund (BRGF) and Integrated
Action Plan (IAP) is severely impacting the most vulnerable population and the
backward regions of Odisha and urged upon the Prime Minister to restore Central
assistance for these programmes.
Further, highlighting that Odisha continues to
suffer from historical neglect in both road and rail communication, the CM
stated that the Railways should now expedite project implementation of long-pending
projects as Odisha has proactively come forward to participate financially in
these projects.
He reiterated his request that the Centre should
share at least 60 per cent of the collected cess with the coal-bearing States.