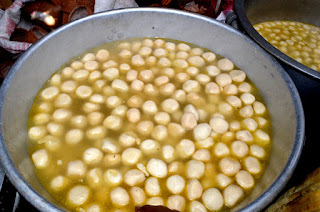 Bhubaneswar, July 17: Coinciding
with the ‘Niladri Bije’ (Return to the sanctum sanctorum) of Lord Jagannath and
His siblings in Puri, ‘Rasgola Divas’ dominated as the central theme here on
Sunday at the 27th Raahgiri along the Janpath, with hundreds of visitors
watching live the making of the famous Pahala Rasogla, which is gradually
inching towards a GI tagging, filed by the Odisha Government.
As per the age old tradition,
Lord Jagannath offers Rasagola to Goddess Laxmi while
returning to the temple after the car festival.
A geographical indication (GI) is a name or sign used on certain products which
corresponds to a specific geographical location or origin (e.g. a town, region,
or country).
Since last year during Nabakalebar,
the ‘Niladri Bije’ has also been celebrated as ‘Rasagola Dibas’ by Odias
worldwide. This was initiated when a war broke between Odisha and West Bengal
over the `ownership’ of the traditional sweet, popular in the entire Eastern
region.
Today a distinguished panel of
guests were there on stage and the list included Housing and Urban Development
Minister Pushpendra Singh Deo, Culture and Tourism Minister Ashok Chandra
Panda, chairperson Odisha Building and Other Construction Workers’ Welfare
Board Subash Singh, Odisha Film Development Corporation Muna Khan, President
Odisha Khadi and Gramodyoga Board Tejeswar Parida, CRPF DIG Odisha TN Khuntia,
special invitees Soumya Ranjan Patnaik, founder Eastern Media Limited and Gopal
Krushna Mohapatra, group editor Prameya. Mayor Ananta Narayan Jena, Deputy
Mayor K Santi and Municipal Commissioner Dr. Krishan Kumar were present.
The hit songs of
yesteryear singer Tansen Singh was also another attraction at Raahgiri today,
other than the Rasagola as the singer sang some of the popular numbers and once
again proved that old is gold.
There are more than 300 people
engaged in 80 stalls making the Pahala Rasagola.