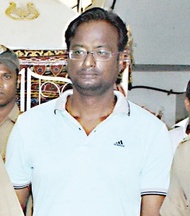 Bhubaneswar, July 31: Pradip Sethi,
chairman-cum-managing-director of tainted Artha Tatwa (AT) Group, a money
collection company, on Saturday evening attempted to commit suicide by slitting
his wrist at the Jharpada Speical Jail here but the timely action taken by the
jail authorities saved his life.
Sethi, who is lodged at the jail as an undertrial in
connection with the chit AT fund scam, attempted to end life by cutting his
wrist in his cell.
While
confirming the development, the Jail Superintendent said Sethi tried to
commit suicide by slitting his wrist but timely intervention by the jail staff,
who were was present at the time of the incident, saved his life.
“He attempted suicide to put pressure on the jail
authorities. However, he is safe now. Jail doctors are treating him. We have  kept a strict vigil on him to avoid such
further incidents,” said the Jail Superintendent.
Sethi was arrested on May 12, 2013 and since then he
is lodged at the Jharpada jail. He is charged with cheating investors of crores
of rupees in different parts of Odisha.

OHRC seeks report from top officials over killing of civilians