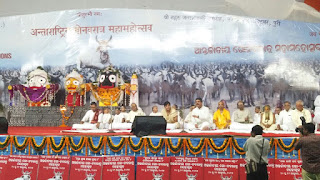 Bhubaneswar,
October 20, 2017: The nine-day International Gau-Navratri Mahotsav-2017 was
inaugurated by Shankaracharya Nischalananda Saraswati at Saradhabali in Puri in
the presence of Union Minister Dhamendra Pradhan.
The Mahotsav
which is being organised in Odisha for the first time witnessed a huge crowd on
the inaugural day. The International Go-Navratri Mahotsav is known for
spreading awareness and developing consciousness about the sacred indigenous
Gau-Mata among the believers and non-believers across the globe.
The event
aims at protection of the cattle community from illegal means of slaughtering.
Statistics say the cattle population in pre-independence India was almost 100
crores which has dwindled to an unbelievable low level of population less than
10 crores due to slaughtering of these animals.
During the
nine-day event, various activities for spreading awareness about the indigenous
Gau-Mata and its contribution in abundance to mankind will be exhibited. The
activities include workshops to be conducted on a regular basis where eminent
scientists will discuss on various aspects of cattle like Panchagavya Chikitsa
Se Sharir, Govansh Ke Mukhya Rog, Govansh Me Rogon Ki Janch, Gaushala Me Bimari
Par Niyantran and many more.
Workshops
will be followed by Gau-Pujan and Arti and public meetings in the evening.