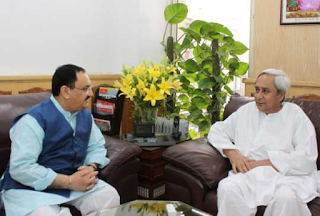 Bhubaneswar,
May 8: Chief Minister Naveen Patnaik on Friday met Union Health and Family
Welfare Minister Jagat Prasad Nadda at New Delhi and drew the attention of the latter
about the need of Super Specialty Institute of Mental Health and Neuro Sciences
at Cuttack on the pattern of NIMHANS Bangalore, to cater to the need of the
entire eastern region.
Patnaik
informed that the State Government has already identified 18.33 acres of land
for the purpose at Ramdaspur in Barang Tehsil, Cuttack.
Patnaik
also urged Nadda to approve the revised Detailed Project Reports along with estimates
for establishing five new Medical Colleges at Koraput, Bolangir, Puri, Balasore
and Baripada at a cost of Rs 2450.90 crore.
Maintaining
that there was an urgent need to strengthen the drug regulatory system in the
State including setting up of a Drug Testing Laboratory at Sambalpur and the
Chief Minister impressed upon the Union Minister to approve the project
proposal costing Rs 56.35 crore early.
In
addition, Patnaik mentioned that the State Government has decided to allot an
acre of land in Khurda district for setting up of Central Cosmetic Testing
Laboratory which may be sanctioned early as that would facilitate testing of
cosmetics manufactured in the entire eastern region including in Odisha,
Jharkhand, Bihar, Chhattisgarh, West Bengal and Assam.
Further,
he brought to the notice of the Union Minister that his Government has handed
over physical possession of 10 acres of land in Bhubaneswar to the construction
agency, Hindustan Lifecare Limited (HLL) for setting up of a Regional Institute
of Para Medical Sciences and has also consented to the revised cost in the
range of Rs 150-180 crore for this project and accordingly urged upon the Union
Minister to expedite construction of this project.
Patnaik
also highlighted the need to upgrade the existing Regional Centre, Cuttack to
State Cancer Institute and assist other medical colleges including Burla
Medical College, Sambalpur, MKCG Medical College Hospital, Berhampur and
District Hospital, Bhawanipatna to enhance the Tertiary Cancer Care facilities
in the State.
He
informed the Union Minister that the detailed proposals in prescribed format
have already been submitted by the State and impressed upon the Union Minister
to sanction one time financial assistance upto Rs.120 crore for the State
Cancer Institute and of Rs.45 crore for each of the Tertiary Cancer Care
Centres.
Patnaik
brought to the notice of the Union Minister that Government of Odisha has
already handed over physical possession of 20 acres of land in Khurda district
for setting up of the Central Institute of Yoga and Naturopathy and urged upon
the Union Minister to expedite the establishment of the Central Research
Institute.
He also
urged the Chief Minister to enhance the fund provided under Rashtriya Arogya
Nidhi to Rs 10 crore per annum.