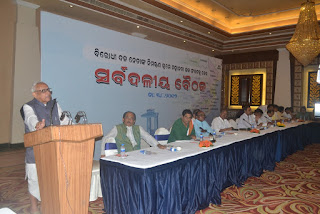 Bhubaneswar, Aug 3: In a move that could unnerve the
Naveen Patnaik Government, members 16 Opposition parties buried their
differences to put up a united front against Chief Minister Patnaik’s ‘illogical’
dealings involving Mahanadi water dispute issue and gathered at an all-party
meeting convened by Congress leader and Leader of Opposition in the Assembly
Narasingha Mishra on Wednesday.
Around 50 leaders from Congress, BJP, CPI, CPM, CPI
(ML) Liberation, TMC, RJD, NCP, Samrudhha Odisha, Aam Odisha, RPI, CPI (ML,
Vibrat Odisha, Kalinga Sena, Forward Bloc, SUCI and many civil societies and
farmers’ bodies attended the meeting and slammed the Central, Chhattisgarh
Governments for unilateral constructions of host of barrages upstream Mahanadi.
All the participants also slammed the Odisha Chief Minister
for not taking the opposition parties into confidence on the issue and bring a
political consensus to put a united pressure on both Chhattisgarh ad Central Governments
to immediately stop the construction work.
“A committee will be formed taking members of the
all the party participated in the meeting in seven days which will decide the
future course of action. We will meet Governor and submit a memorandum to the
President through him on Mahanadi issue,” said LoP Narasingha Mishra after the
meeting.
“We demand a
Whitepaper on Hirakud. The Government should inform people the actual status of
the reservoir, damage caused or to be caused due to construction of dams
upstream Mahanadi by Chhattisgarh Government and State’s measures taken on
several occasions on Hirakud,” said Mishra.
Mishra also said as per the 1983 bilateral agreement
between Odisha and Madhya Pradesh, a joint control commission should be set up.
“The Chief Minister should put pressure on the
Center to set up a Tribunal on the Mahanadi issue. If the State writes to
Centre for a Tribunal, the Centre will be forced to write to the Supreme Court
on this. Once the Tribunal formed, it is bound to submit its report within
three months,” said Mishra.
Ruling BJD spokesperson Pratap Keshari Deb, however,
criticised the meeting and questioned the absence of PCC president Prasad
Harichandan and BJP chief Basanta Panda in the meeting.
Out of the 16 Congress MLAs 14 were present in the
meeting, including Narasingha Mishra. BJP leaders KV Singhj Deo, Pradip
Purohit, Bijay Mohapatra also attended the meeting.

Narasingha calls all party meeting on Mahanadi issue on Aug 3