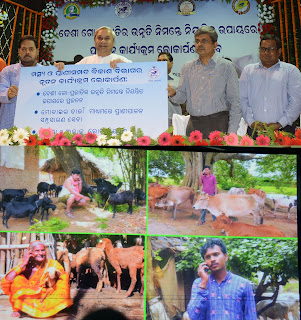 Bhubaneswar, Sep 26: Fisheries
and Animal Resources Development (F&ARD) Department has planned to initiate
artificial insemination (AI) in 10,000 indigenous/Non-Descript cows from
October 2 to 8 by adopting advanced reproductive technology of synchronised
breeding through camp mode with an objective to sensitise and motivate the
farmers rearing Indigenous cattle.
Non-descript cows of
the State in all the districts where J K Trust and BAIF are engaged in the
dairy development process will be covered under this project by following the estrous
synchronisation protocol.
Synchronised breeding
is an advanced reproductive method, where two physiological events – estrous
and ovulation are controlled by using reproductive hormones. Under the proposed
program in the State, double synch protocol will be followed for
Synchronisation of cattle.
Cyclic cows will be
selected in the operational area covering 500 AI centres and cows will be
tagged for identification in each proposed centre, said F&ARD Secretary
Bishnupada Sethi.
These cows will be
provided with deworming medicine and supportive therapy like Mineral mixture
and Vitamin supplementation for better sexual health. The selected animals will
be given first dose of hormone PGF2 followed by GnRH
after two days. Second dose of hormone PGF2 will be given on 9th day after
first dose of PGF2 followed by GnRH on 11th day. All the animals undergone hormonal induction will be kept under observation by tying
these animals in the cow shed. The owners of the cow and local veterinary field
staff will be in constant touch for observing the oestrus symptoms in the cows.
The concerned field staff will inseminate the cows with indigenous semen like
Gir, Sahiwal and Red Sindhi followed by second insemination after 24 hours.
To encourage the
owners of the ND cows and lessen the financial burden, collection of user
charges will not be made towards animal examination and follow up services from
farmers participating in the program. However, farmers will pay user charges
towards first artificial insemination of their cow. The complete data base of
the animals covered under controlled breeding programme will be maintained
properly.
This programme intends
for creating interest among farmers for rearing of indigenous breeds/
Non-Descript cows and for enhancing productivity of existing indigenous and
non-descript cattle through genetic up-gradation. The productivity of indigenous
non descript cattle in the State is only 1.47 litres per day against the
National average of 2.36 litres per day during 2012-13. In other areas of
State, apart from 500 Artificial Insemination Centres, where controlled
breeding program is not carried out, a massive campaign will be undertaken for
up-gradation of non-descript cows during the week.
The Controlled
Breeding Programme in indigenous non-descript cattle was launched by Chief
Minister Naveen Patnaik for the benefit of dairy farmers in the State.