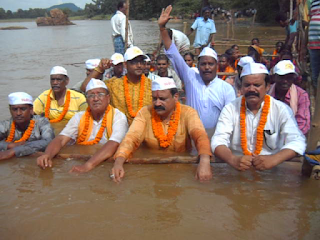 Bolangir, Sep 26: Aggrieved
displaced villagers of the Lower Suktel project on Monday started an indefinite
Jan Satyagraha at Khagsabahal village, 25 km from here, in the Suktel river.
Members of the Bolangir
Action Committee led by Gopalji Panigrahi started the agitation protesting the
State Government’s slipshod attitude in providing adequate compensation as per
the Government policy.
The villagers are
demanding implementation of Land Acquisition Policy (LAP) 2013 for the Lower
Suktel Irrigation Project and adequate compensation and proper rehabilitation
of the displaced people as the LAP 2013.
“We are not opposing
the project. What we have been demanding for years is adequate compensation by implementing
LAP-2013 for the Lower Suktel Irrigation Project and proper rehabilitation of
the displaced people. But nothing tangible has happened as yet. Hence, we start
an indefinite stir to put pressure on the Government,” said Panigrahi.
However, another group
of villagers of Khuntpali-led by Upendra Sahu also stage a stir there demanding
that compensation be first paid to the project oustees before any construction
work started.
In 2012, we supported
Bolangir Action Committee agitation for the Lower Suktel project. However, we
were let down by Gopalji Panigrahi and others. They have come to befool us by
ignoring our genuine concerns, alleged the villagers of Khuntpali before
Balangir Sub- Collector Bimal Prasad Mohanty at the dharna site.
Even, members of Lower
Suktel Budi Anchal Sangram Paishad, another outfit which has spearheaded a
16-year long campaign, never undertook the Jal Satyagraha.
Meanwhile, Health,
Fire and ODRAF teams, besides police were deployed to avert any eventuality.

‘Full-fledged AIIMS Bhubaneswar to be ready by yr-end’