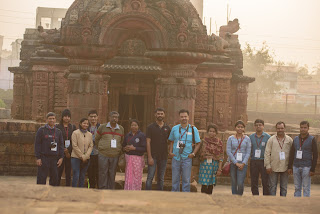 Bhubaneswar, Jan 1: Taking a New Year resolution of sorts, as
many as 25 participants, mostly youngsters, today took part in the Ekamra Walks
discovering the untold tales behind monuments in the Heritage District.

Interestingly, one NRI professor from Arizona State
University, US, three tourists from Kerala and four visitors from Kolkata were
part of today’s heritage walk.

The visitors also
visited the temple kitchen inside Ananta Vasudev Temple and saw the traditional
preparations of delicious dishes in pure Odia style. In fact, in the entire
Ekamra Kshetra Ananta Vasudev Temple is known for its traditional kitchen and
people often make a beeline to take the `prasad’ inside the campus or just take
them home inside traditional pots made of clay. The clay pots are known as
`kudua’ in local Odia. 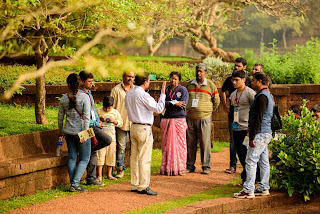 Like last week’s performance flutist Jagat Ranjan Patnaik
came with select morning `raagas’ on his instrument as a `jugalbandi’ to the
historic event, inside the precinct of Mukteswar Temple. The visitors, before
taking the walk listened to Jagat’s melodious composition.
He also beautifully played Mahatma Gandhi’s famous prayer
“Vaishnav jan to, tene kahiye je..’’ and it was very much appreciated by the
participants. After Mukteswar the group went to Parsurameswar and then saw the
early morning scene on the Eastern bank of Bindusagar lake and proceeded to
Ananta Vasudev Temple.
After the trip to Ananta Vasudev Temple the group visited the
traditional guest house or `Dharmashalas’ for budget pilgrims coming to the
Temple City from all corners of the country. The walkers were surprised to see
the old world charm of the `Dharmashalas’ and there architecture. After the
Ananta Vasudev Temple on the Eastern bank of Bindusagar there are two prominent
`Dharmasalas’.
The visitors also took a walk near Lingaraj Temple, saw it
and Parvati Temple from the Northern Gate’s platform for foreign visitors, and
visited the beautiful Chitrakarini Temple and then entered the narrow lane of
Suka-Sari Temple. They watched the traditional temple building work by the
artists engaged by the Archaeological Survey of India. In fact, all the temples
made of huge stone blocks were joined with a traditional paste made from lime
stone. The visitors were surprised to see the craftsmanship of the stone artisans
from a village near Dhauli.
They also saw the old Sanskrit College, took a walk along the
Parikrama along the Holy Bindusagar Lake, saw the Mohini Temple along the
Parikrama, being repaired by the Odisha State Archaeology and then reached
Vaitaal Temple.
After visiting the
unique Vaitaal temple, the tour to medicinal plant garden was a knowledge-based
experience as the senior Forest officer Ashok Mishra explained in details about
the design, concept and theme of various segments of the garden.

Odisha bonded labourers slam Govt for not rehabilitating them

103 crorepatis in fray for first phase Assembly polls in Odisha