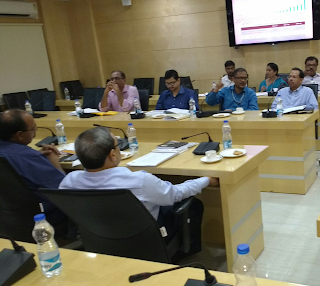 Bhubaneswar, Aug 16: The
State Level Empowerment Committee (SLEC) headed by Chief Secretary Aditya Prasad
Padhi on Tuesday recommended inclusion of five more clusters under Rurban
Mission in the State.
With the fresh recommendation
the number of clusters taken up under Rurban Mission in Odisha increased to 10.
Panchyati Raj Secretary
Deo Ranjan Kumar Singh presented the proposals and outlined the procedures to
be adopted in planning and execution of developmental activities in these Rurban
villages at the SLEC meeting chaired by the Chief Secretary.
The Chief Secretary directed
the concerned authorities to finalise the Integrated Cluster Development Plan
(ICAP) for each cluster within this week. Padhi also directed to focus on
income generating and sustainable livelihood supporting activities in each
cluster. Development Commissioner R Balakrishnan advised for GIS based planning
of each cluster.
“The newly recommend
areas included under Rurban Mission include Khalikote of Ganjam district,
Bhedan of Bargarh district Umorkote of Nabrangpur district, Kothgarh of
Kandhamal district and Tusura of Bolangir district. Earlier five areas namely
Samasingha of Jharsuguda district, Banapur of Khorda district Talabasta of
Cuttack district, Thakurmunda of Mayurbhanj district and Utkela of Kalahandi
district were included under the Rurban Mission,” said Panchayati Raj Secretary
Seo Ranjan Kumar Singh.
Singh added that the SLEC
considered the draft Integrated Cluster Development Plan (ICAP) prepared for
earlier included areas. The ICAP envisaged projects of worth around Rs 500 crore
for these five areas. While 70 per cent of the estimated expenditure would be
arranged from the convergence of ongoing plans and schemes at the State level
and around 30 per cent would be provided by the Centre as grant.
Projects like road
connectivity, piped water supply, irrigation, solid waste management, digital
connectivity, street lights, sanitation projects, income generating livelihood
activities, health services,  LPG
connections etc have been seen as common felt needs in these areas.  These clusters would be developed as Rurban
villages preserving the nature and essence of rural community life with urban
living facilities. Each cluster will be developed and managed as one planning
area.
Available data shows
Thakurmunda will be developed as a cluster with multiple sustainable livelihood
opportunities, Utkela will be developed as a commerce cluster, Talabasta as a
agro cluster, Banapur as a tourism cluster and Samasingha will be developed as
a village handicraft cluster. Chief Secretary directed to create facilities for
promotion of livelihood and income generating activities in each of the focus
sectors in identified clusters.
Secretaries of various
departments were present at the SLEC meeting.