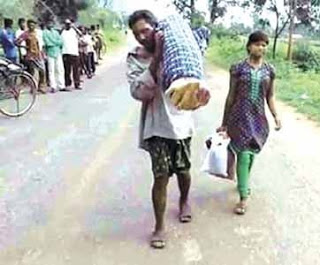 Bhubaneswar,
Sep 1: The State Home Department has refused to conduct an inquiry into the
Kalahandi incident involving a tribal person, Dana Majhi (42), who carried the corpse
of his wife for around 10 km as no vehicle or ambulance was provided by the
district administration.
The Home
Department on Monday while disposing of a grievance petition of city-based human
rights activist and transparency campaigner Subash Mohapatra, said it could not
carry out an investigation into the incident as it relates to the Home Department.
“This matter
does not relate to Home Department as this matter coming under Health
Department,” said a letter of the department.
Mohapatra,
in his petition, alleged that Dana Majhi and his minor daughter were subjected
to abuse by the Kalahandi District Headquarters Hospital (DHH) staffs and the
District Collector Brundha D.
“It is
unfortunate that instead of helping a tribal person, Chief District Medical
Officer Braja Kishore Brahma managed to shield his colleagues,” alleged
Mohapatra.
The Naveen
Patnaik-Government faced widespread criticism last week when locals found Dana Majhi
carrying his wife Amang Dei’s body on his shoulder, wrapped in clothes, along
with his 12-year old daughter. The 42-year-old woman had died of TB at the
district headquarters hospital at Bhawanipatna.