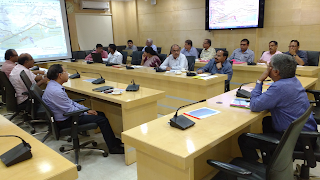 Bhubaneswar,
Sep 3: Around 451 km of coastal highway has been proposed to be constructed
under Bhratmala Pariyojana along the coastal line of Odisha.
A high level
meeting of National Highway Authorities of India (NHAI), Odisha region held
under the chairmanship of Development Commissioner and Chief Secretary (In-charge)
R Balakrishnan in the Secretariat conference on Saturday considered the
proposed alignment of the highway.
Dharmanada
Sarangi, Chief General Manager (CGM) of NHAI made a power point presentation about
the proposal.
Balakrishnan
directed to make the road architect aesthetically and environmentally
compatible in consultation with Forest and CRZ authorities. He also directed to
plan the alignment in such a manner that it boosts the tourism and port based
industrial activities in the State.
NHAI was
also advised to share the plan with the respective departments and concerned
district Collectors for their considered inputs.
CGM Sarangi
said that presently the proposed road proceeds through Chhatraput-Satapada,
Konark-Astaragnga-Nuagaon-Paradeep-Ratanpur-Satabhaya-Dhamara-Basudevpur-Talapada-Chandipur-Chandaneswar-Digha.
Out of the
total length of 451 km around 29 km come under Ganjam district, 153 km come
under Puri district followed by 54 km in  Jagatsinghpur, 49 km in Kendrapara, 61 km in Bhandrakh,  99 km in Balasore district and six km in connecting
east Medinipur in West Bengal.
More than
178 villages in all these districts would be connected by the road. There would
bridges over river Rushikulya, Palur sahib canal, Chilka lake, river
Dhanikhiya, Nua,  Khushabhadra, Kadua,
Devi, Hansua, Mahanadi, Gobari, Patashala, Brahmani, Baitarani, Mantei,
Panchapara, Dubdubi and  Subarnarekha.
Besides, bypasses would be constructed near Bajrakote, Maludkhas, Brahmagiri,
Rebana Nuagoan, Konark, Gagua, Jarimul, Gula, Basudevpur, Anantapur, Gopalpur,
Rasalpur and Panchupali .  The road would
provide a boost to tourism and industrial activities in the region. It would
also serve a high way linkage to all ports in the State.
The DC advised
NHAI to follow the principles like alignment of the road close to coastline in
accordance with CRZ rules, develop and use the existing roads wherever
possible, by pass densely populated areas, avoid wild life sanctuaries and
forest areas to the extent possible.
Available
data show so far two expert consultants have been engaged for preliminary
survey and preparation of the DPR. In the meanwhile preliminary survey has been
conducted and preliminary alignment of the road has been suggested. Detail project
reports are expected to be completed by February, 2017.
Water
Resources Principal Secretary Pradeep Kumar Jena, Works Secretary Nalinikanta
Pradhan along officials of NHAI, Forest and Environment Department and Collectors
of concerned districts participated in the deliberation.

103 crorepatis in fray for first phase Assembly polls in Odisha