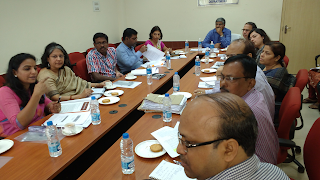 Bhubaneswar,
Sep 3: In another proactive step towards addressing the problem of gender based
violence in the State, a draft standard operating procedure (SOP) to deal with
such cases was approved on Saturday and sent to the State Government for final
concurrence.
A high level
inter-departmental meeting to this effect was held under the chairmanship of
Development Commissioner (DC) and Chief Secretary (In charge) R Balakrishnan at
the Secretariat conference wherein health and Family Welfare Department Principal
Secretary Arti Ahuja outlined various dimensions for discussion.
Considering
the draft SOP, the DC directed the department to make the SOP more realistic
and put in place a compliance tracking system both at the State and district
levels.
“Various
guidelines have been circulated at various points of time through several departments
to deal with the cases arising out of gender based violence. The gaps in
implementation of these guidelines have been analyzed. Many suggestions have
also been received from various forums. A trial is being made to formulate a
comprehensive SOP on the basis of these inputs in order to have a more
effective system in place,” said Ahuja after the meeting.
She said her
department has formulated an integrated draft SOP which was discussed in the
meeting. Suggestions received in the meeting would be incorporated in it and
the final draft would be submitted to Government for approval.
The role and
activities of seven departments and agencies like health and family welfare, police,
child welfare committees, protection officers, shelter homes, child care
institutions and legal service providers have been integrated in the proposed
draft SOP.
The issues
relating to preparedness and response of the administration to gender based
violence cases, medical examination and treatment of the victim, collection of
the evidences, seamless linkages and referrals among various service providers,
safety of the victim, privacy and dignity of the victim, role of police, protection
officers, CWCs, shelter homes and child care institutions, support for
initiating legal action, prosecution of the accused, short term and long term
rehabilitation support to the victim etc were thoroughly deliberated in the
meeting.
The DC advised
that the provisions of no harassments to the good  samaritans who comes to the rescue of the
victim be included in the SOP.
Law Secretary
Bibhu Prasad Routroy, School and Mass Education Secretary Ranjana Chopra, Women
and Child Development Secretary Vishal Dev, Home Department Special Secretary
Home Lalit Kumar Das along with senior officers from concerned departments attend
the meeting.