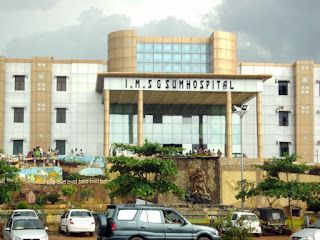 Bhubaneswar, Sept 10: A complex cardiothoracic surgery on a
55-year-old patient in critical condition has been successfully performed at
the Institute of Medical Sciences and Sum Hospital (IMSSH) here recently saving
his life.
The surgery combining three operations simultaneously–
closure of a hole in the heart, mitral valve replacement and bypass surgery–
was conducted in the Cardio Thoracic and Vascular Surgery department of the
hospital, run by the SOA University.
According to a university release, the patient who had been
evaluated earlier in different hospitals came to the Sum Hospital in a critical
state as he had low blood pressure, generalized swelling, low oxygen
saturation, right ventricular failure and liver dysfunction.
As he had the hole in the heart since birth, the pressure in
the lungs was high and he had right ventricular dysfunction which gradually led
to leakage from mitral valve of the heart. A coronary angiogram done on him
detected blockage in the coronary artery.
Dr. Jitendra Nath Patnaik, Chief Cardiac Surgeon in the
hospital and his team decided to undertake the risky surgery considered highly
dangerous as the combination of three surgeries together is extremely rare. Dr.
Chandrasekhar Pradhan was the anesthetist.
After the six-hour-long operation, the patient made steady
recovery and was discharged from the hospital on the tenth day.  The CTVS department of the hospital has been
conducting critical open heart cases at low cost but good result, the release
said.