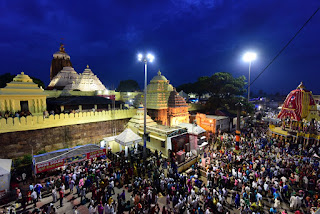 Bhubaneswar, Sep 11: The Justice BP Das Commission set up by
the Odisha Government to suggest reforms in the management of Shree Jagannath
Temple, would visit Puri on Monday to begin its probe.
After being appointed the head of one man commission Justice
BP Das will be in Puri for the first time on Monday to interact with the
district administration, temple authorities and the servitors of the 12th
century shrine, sources said.
Though the Commission was scheduled to visit the pilgrim city on
September 2, but could not turn up due to Bharat Bandh called by trade unions
on that day.
On July 21, the State Government appointed the former Orissa
High Court judge as head of the Judicial Commission following a hue and cry
over the attack on the Puri district Collector Arvind Agarwal and delay in
conducting the rituals of Lord Jagannath on Niladri Bije day (Return to the
sanctum sanctorum) on July 17.
Justice Das would be assisted by former temple administrator
Mahimohan Tripathy.
Timely conduct of rituals, helping devotees to have a good
darshan of the deities and welfare of the servitors, security aspects of the
temple and conservation of the shrine will be the issues that will come under
the Commission’s purview,