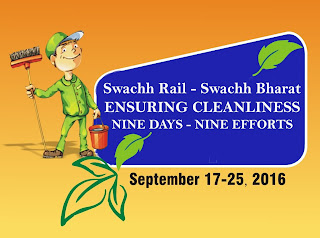 Bhubaneswar, Sep 16: East
Coast Railway (ECoR) is all set to launch a special cleanliness campaign to
mark Swachh Rail-Swachh Bharat- Swachh Saptah on Saturday. The campaign would
culminate on September 25.
The campaign would be
conducted in the ECoR jurisdiction involving “Swachh Paryavaran-Clean
Environment”, “Swachh Station-Clean Station”, “Swachh Railgadi-Clean Train”,
“Swachh Neer-Clean Water”, “Swachh Parisar-Clean Complex”, “Swachh Sahyog-Clean
Participation”, “Swachh Samvad-Clean Dialogue ”, “Swachh Samarpan-Dedication
for ensuring Cleanliness” and “Swachh Aahar-Clean and Hygienic Catering” and
also awareness activities for keeping the sphere of work neat and clean with
special focus on respective fields in view of the direction of Prime Minister Narendra
Modi as a part of the Clean India Campaign.
The weeklong campaign
would include special drives on cleanliness at railway stations and trains with
a focus on cleaning of water booths and quality of drinking water, quality of hygienic
food, cleaning of drains, adequacy of dustbins, garbage disposal, cleaning
campaign by associating schools, NGOs and other charitable institutions, etc.
and interaction with media.
All Railway officials
would participate in the programme. A comprehensive cleanliness action plan for
this has been prepared to cover stations, trains, tracks, workshops, colonies,
etc., with physical involvement of officers and Staff at every level.
Higher level officers
would be deputed to each A-1 and A stations. The campaign would be personally
led by ECoR GM Umesh Singh.