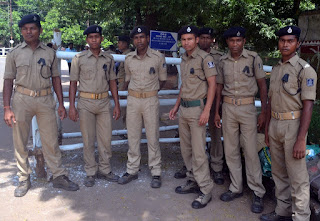 Bhubaneswar, Sep 22: Low-rung police personnel would get one month’s
additional salary (Grade pay) in the State. A notification to this effect has
been published by the Home Department after the Finance Department gave its nod
to the proposal.
The Grade Pay would be given to Constables, Havildars,
Sepoys and Lance Naiks. The maximum limit of the additional remuneration would
be Rs 20,000, the notification stated.
This notification assumed significance as the Havildar,
Constable and Sepoy Mahasangha protested the Government’s apathy by wearing
black badges at work on Wednesday and also threatening to resort to cease-work
agitation from Friday demanding fulfilment of a six-point charter of demands.
Their demands included Grade Pay, daily ration allowance and regularisation of
contractual jobs, among others.
More than 60,000 Havildars, Constables and Sepoys have protested
the Government apathy by sporting black badges.