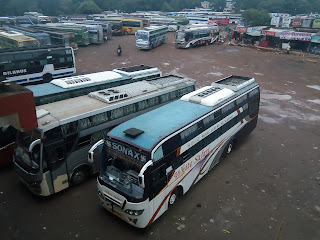 Bhubaneswar,
Sep 29: Normal life was affected on Thursday across the State, including
Cuttack and Bhubaneswar, with over 18,000 private buses commencing an 24-hour
strike, protesting the arrest owner of ‘Maharaja’ a bus which met an accident
near Manitri of Athmallick in Angul district on September 9 killing 19 persons. The private
buses will stay off the roads from till 6 am on Friday.
The State
truck association has also lent its moral support to the strike called by the
All Odisha Private Bus Owners’ Association.
The
association has also threatened to go for a strike for an indefinite period
from October 7 if the owner of the bus is not released immediately and the
cases registered against him is withdrawn.
Notably,
Maharaja bus owner Rusav Kumar Tripathy by the Angul police.
Meanwhile,
commuters were facing trouble with buses not turning up for work.
Though
several rounds of reconciliatory meetings held between the association and
Transport Minister Ramesh Majhi had failed with both sides sticking to their
stand.
In the wake
of the strike, public were depending on private and own vehicles for commuting
even as several commuters complained that private transporters were
overcharging.
Meanwhile,
after meeting with Minister Majhi and others, the owners said that they would
decide on their indefinite strike decision at the general body meeting on
October 5.