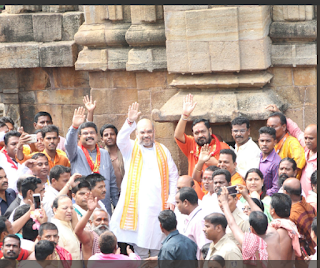 Bhubaneswar, August 7, 2017: On the second of his three-day
tour to Odisha to give fillip to his party’s efforts to strengthen its base at
the grassroots level in order to meet his ‘Mission-120’ target, BJP national president
Amit Shah on Thursday paid obeisance at Lingaraj Temple here to seek blessings
of the Almighty.
He was responded warmly to the enthusiastic people and party
workers who greeted him outside the 11th century Shiva shrine at around 8.30 am.
“Feeling blessed after visiting Lingaraj Temple in
Bhubaneswar,” Shah tweeted after seeking the blessings of the Almighty.
A beaming Shah waved at them before being escorted into the
shrine by senior BJP leaders, including Union Petroleum and Natural Gas and
Skill Development Minister Dharmendra Pradhan, party Odisha unit president
Basanta Panda among priests and servitors.
Shah spent a good time at the temple premises amid tight
security and offered flowers, bel leaves, milk, coconut water and sweets in a
special puja to Lord Lingaraj, sources said. He also interacted with sevayats
and enquired about different aspects of the world famous shrine.
Soon after his arrival near the temple at around 8.30 am, Shah
was greeted by his followers who had gathered outside the temple to catch a
glimpse of the leader.
He offered flowers, bel leaves, milk, coconut water and water
to the deity, sources said. Flanked by Union Petroleum and Natural Gas Minister
Dharmendra Pradhan and State BJP president Basanta Panda, Shah went around also
visited the other temples located inside the Lingaraj Temple premises.
Elaborate security arrangements were made to maintain law and
order and smooth visit of the saffron party chief to the temple.
In the afternoon, Shah will meet party’s media, IT, social
media, election management committees, Ajeevan Sahyog Nidhi and office
construction committees. He will also separately meet the BJP Odisha core group
members today.